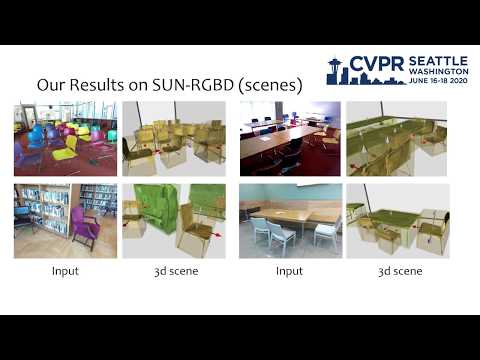 If you are inspired by our work, please consider citing:

The network architecture follows a ‘box-in-the-box’ manner and consists of three modules: 1. Layout Estimation Network (LEN); 2. 3D Object Detection Network (ODN); 3. Mesh Generation Network (MGN). From a single image, we first predict 2D object bounding boxes with Faster RCNN. LEN takes the full image as input and produces the camera pose and the layout bounding box. Given the 2D detection of objects, ODN detects the 3D object bounding boxes in the camera system, while MGN generates the mesh geometry in their object-centric system. We reconstruct the full-scene mesh by embedding the outputs of all networks together with joint training and inference, where object meshes from MGN are scaled and placed into their bounding boxes (by ODN) and transformed into the world system with the camera pose (by LEN).

We provide source codes and related data of the project on https://github.com/yinyunie/Total3DUnderstanding

Your browser is out-of-date!

Update your browser to view this website correctly. Update my browser now